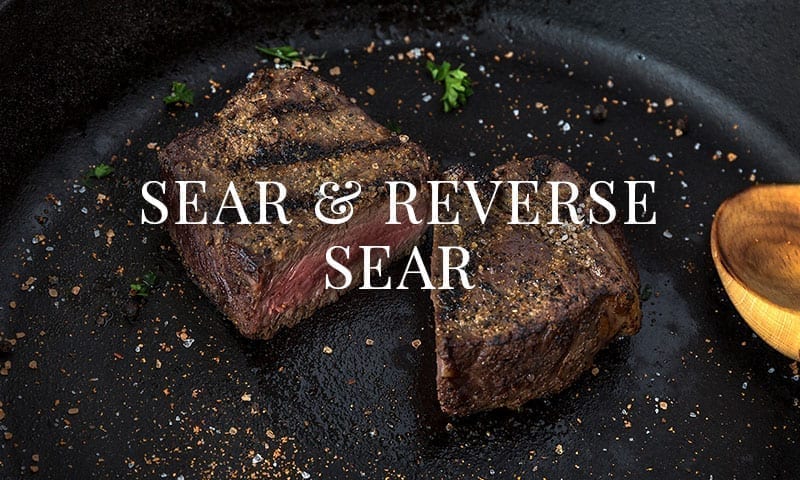 When cooking a steak the single most important factor is the internal temperature of the meat, period, end of story. But that does not define the whole steak experience. Enter Sear and reverse sear method of cooking.

A surge in the popularity of a type of cooking called sous-vide is probably a big part of why we’re hearing more about the “reverse sear” process these days. Sous-vide is a French phrase that translates to “under vacuum”. Anyway, sous-vide is a very ingenious method of cooking a wide variety of food to a very precise internal temperature. It utilizes a bag to isolate the food being cooked from the bath in which it is immersed. The bath is generally water that is controlled at a very precise temperature, generally between 131° F to 140° F for meat (higher for vegetables).

Enough about sous vide. Needless to say, a steak that comes out of a bag that’s been sitting in 135° F degree water does not really look particularly appetizing, let alone does it look like a perfectly cooked steak … even though the internal temperature says otherwise. Frankly, steaks look like hell fresh out of the sous-vide bag … so how does the chef fix this little issue? This is where the reverse sear comes in to save the dinner presentation. A little olive oil & butter and a few moments on a hot surface and the steak becomes something to behold. Not only is it cooked to perfection, but the searing process caramelizes the outer surface which helps to open the bouquet of the seasoning and give the steak a much more satisfying appearance.

Is the sous-vide method required if one wants to try a reverse sear at home? Absolutely not. Another method that is perfectly conducive to reverse searing is to oven roast the steak and remove it just below the desired internal temperature is reached. Then reverse sear to perfection.

Searing … you guessed it, it’s just the opposite of reverse searing. The searing method is exactly the same, but in the “searing” process, the steak is seared prior to dropping it into the sous-vide bag, or the oven. The steak is going to sweat and loose a little bit of the caramelization in the sous-vide bag, so a reverse sear is the preferred method when using sous-vide. But, if you’re going to oven finish the steak, there is no harm in searing it prior to finishing, in fact, many prefer to sear first and oven finish second.

Misconceptions can be one of the biggest stumbling blocks to success, especially in the kitchen. There is one huge misconception about searing steaks … drum roll … the temperature of the surface on which the searing is taking place. Many assume – and the damn internet reinforces – that a searing surface should be “red hot” to cauterize the surface of the steak to “seal in the juices”. This is simply BS. The point of searing is to create a caramelized finish that accentuates flavor and visual appeal. A medium/low heat is perfect. The Maillard Effect (the fancy name for caramelization) occurs just above 300° F, which is well below where cooking oil starts to burn and smoke … We prefer to use a 50/50 blend of extra virgin olive oil and unsalted AA butter. The butter will help to form a crust at a slightly lower temperature than the oil alone, it also adds a little richness to the flavor. SO … if you are smoking up the whole kitchen to sear a steak … you’re doing it wrong.

Another misconception is that “searing has to happen on a flat surface”. It doesn’t. Remember the Maillard Effect? The surface of the steak just needs to reach 320° F or so for a brief period to allow the surface to brown. This is easily achieved using direct heat on a grill, the higher the heat, the less time it takes … but again, 300 – 320° F is the target temperature, so no need to get out the propane torch … unless you want to.