Somehow, over the years, the Top Sirloin steak seems to have taken a second (or third) fiddle to the Ribeye and Filet Mignon. A Sirloin done properly is should take a back seat to no steak. So, just how does one “do” a sirloin steak properly?? The secret is a mix of genetics, the cattle’s diet, the way the beef is harvested and aged, and finally, the way the steaks are cut. It’s all about the details, and when the details are minded, it all comes together… Sirloin steaks are typically leaner than other cuts of steak, but that does not mean they are less tender. We take our Top Sirloin steaks a step further and only sell center-cut “baseball steaks” which cook up nicer and eat like a dream. 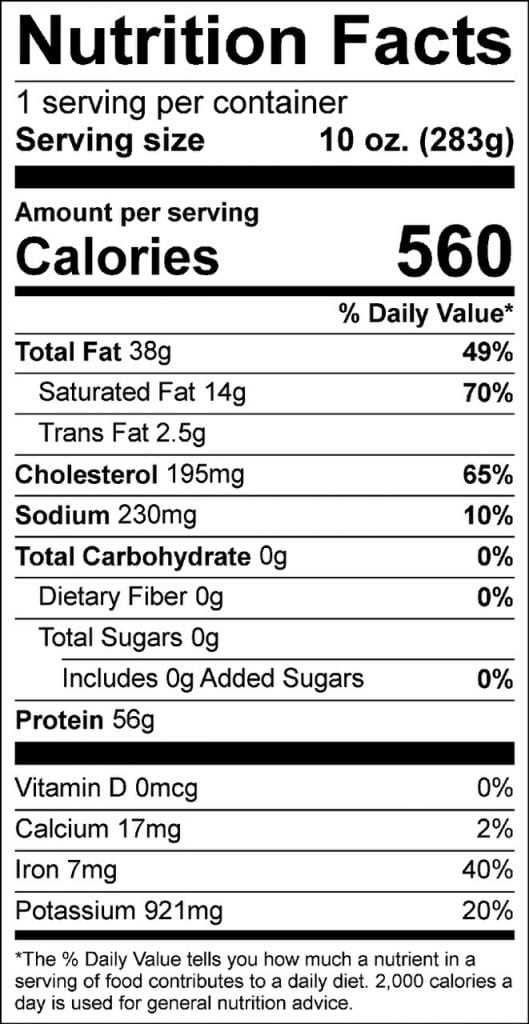 The 10oz Top Sirloin is a steak that punches well above its weight class. The first question many people ask is, “how long should I cook it on each side?”….there is not a consistent answer to that question as there are MANY variables that effect cook time, from the steaks starting temp to the grill surface temp to the ambient temp in which the steak is being cooked. Beyond that, there is a simpler way that is more accurate. The internal temperature of the steak. The way the cooking heat is applied isn’t all that critical, cooking heat can be any variety of methods from a wood fire to a broiler to sous vide; there are MANY great methods to cook a steak. We personally prefer to cook our steaks “rare” and we typically remove larger cuts like the 10oz Top Sirloin from the heat source when the internal temperature reaches approximately 115-118F. The internal temperature will continue to coast up as the steak rests to somewhere in the 125-130F range. This “coast up” is why allowing adequate “rest time” after cooking is so critical when it comes to cooking the perfect steak. The 10oz Top Sirloin is a snap to cook due to its relative thickness which doesn’t heat as rapidly as thinner steaks, thus increasing the amount of time to reach finishing temperature.

Thaw slowly – submerge in a pan of cool water if you’re in a hurry, NEVER a microwave.

Season – Your preferred seasoning, to taste. Some folks apply oil to the steak prior to seasoning, we do not believe that is the best approach, nor do we recommend it.

Cook – Keep track of the internal temp, that’ll tell you when it’s done. Get a good digital thermometer.

Rest – 5 to 10 minutes is best. Don’t cover the steak when it rests, it will stay warm, covering will cause the “coast up” temp to be higher than desired in most cases.

Serve – Let your guests carve their own steak, unless they’re little kids or you’re a control freak…cutting a steak is part of a pleasurable eating experience.

The 10oz Top Sirloin is a very versatile steak. It comes from the rear of the “loin” section of the beef and is a great combination of flavor, texture. Top Sirloin steaks are boneless, without exception. The Top Sirloin will exhibit some “marbling” but typically less than the Ribeye and NY Strip. When Top Sirloin steaks are aged properly, they will rival the NY Strip in terms of tenderness and flavor. We cut our 10oz Top Sirloin steaks to approximately 1” thick. All cattle vary in size so the thickness of the steaks will vary a degree from steak to steak based on the animal from which it came. Lots of folks ask us why our steak thickness varies, and the reason is that we cut our steaks to a specific weight, given the fact that all cattle are slightly different sizes, that means that the variation shows up in the thickness of the steak. If we cut all the steaks to the same thickness, then the weight of the steaks would vary….which would greatly complicate selling them online.

All of our beef is “wet aged” which is a fairly common thing among beef producers. That said, we wet age our beef a minimum of 35 days, which is longer than much of our competition. This makes a difference in flavor and tenderness. The process of wet aging allows enzymes that are naturally present in beef to begin to break down and tenderize the beef. It has more effect on tenderness than it does flavor. Dry Aging, by comparison, is a much different process that relies on the same naturally occurring enzymes to tenderize the beef and dry aging also allows moisture to migrate out of the beef which tends to concentrate the flavor. Dry Aging is a process that is much more like aging artisanal cheese and tends to take on a stronger flavor that not all consumers enjoy. We’ve found “wet aging” for an extended period to be the best case scenario for us.