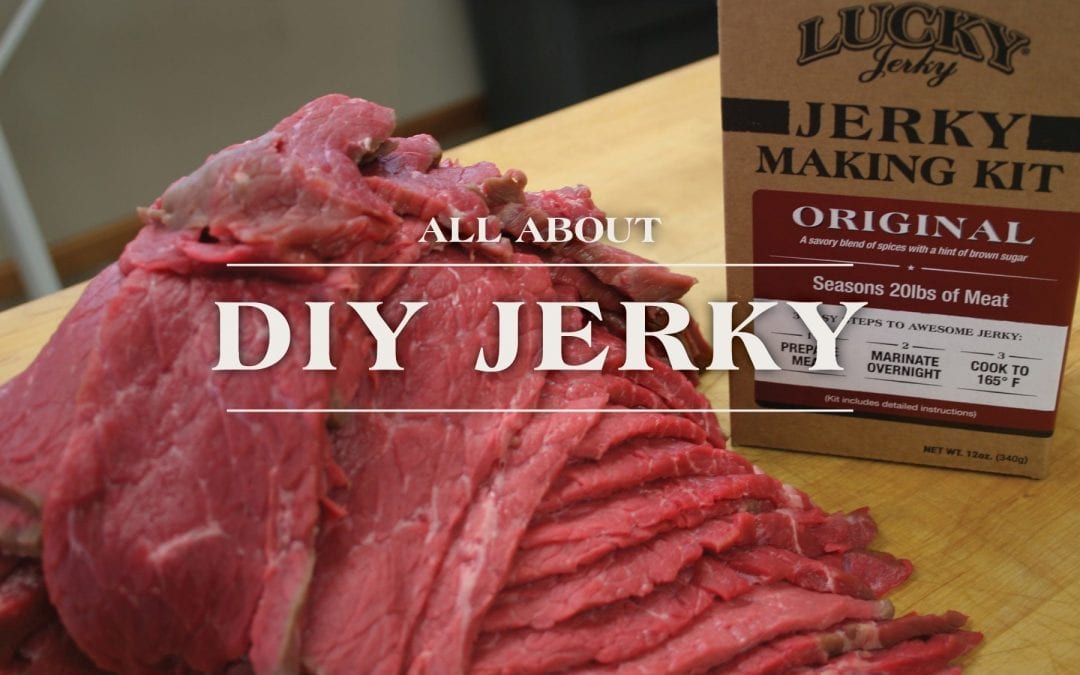 You’ve got a dinner party coming up and you need a break from traditional hors d’oeuvres. You want something that will knock peoples socks off!

Beef Jerky is probably not something that makes the list of “common” hors d’oeuvres  we know.   If you’re thinking ” I can’t believe these rednecks are suggesting this”

…. stop and think for a second… if you were going to serve chocolate chip cookies, you probably wouldn’t get “Chips Ahoy”, would you?  You would bake up a fresh batch of cookies.  Serving them while they’re still warm, taking everyone down memory lane.  Why should beef jerky be any different?  And it’s easier to make than chocolate chip cookies… Win/Win.

DIY Seasoning Kits – Where we start!

The great part about this jerky is that it can sit in the oven at the low temperature until you’re ready to serve, which gives the host or hostess the opportunity to have some flexibility of schedule.  The results will amaze.  Better than any store bought jerky you have ever tried!

All flavors are designed to be great as stand alone products. Use them as bases add additional seasoning and to suite individual taste.  Each package contains 4 packets of cure and 4 packets of seasoning which are all pre – measured for 5 pound batches of jerky.  (5 pounds of raw jerky will turn into 2 – 2.5 pounds of finished jerky.  Serving size – 2 ounces of finished product) 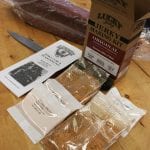 Lucky Beef Jerky “DIY Jerky Seasoning and Cure Kit” is the easiest to use kit on the market. It contains enough seasoning and cure to do 4 5lb batches or 20lbs of jerky total

Well trimmed (or “peeled”) beef rounds can be obtained at your local butcher shop. It’s advisable to have the butcher trim the rounds as it will save a great deal of time. 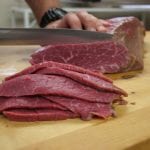 Slicing meat to be used in jerky is simple, use a sharp knife and cut the meat either across the grain for more tender jerky, or with the grain for traditional jerky. (It doesn’t matter if it’s beef, deer, duck, goose, turkey, bear, elk, etc, etc slice it all the same) 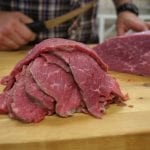 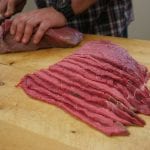 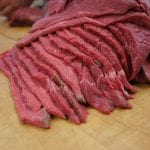 Here’s a close up of the sliced beef round. — at Nebraska Star Beef. 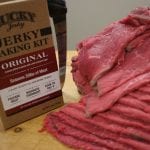 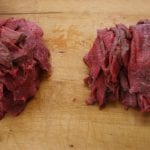 We split the sliced beef round into two 5lb batches. 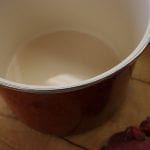 The next step is to mix the marinade. It’s important to use a container that is non-metallic, as metallic containers can impart a metallic flavor to the jerky. 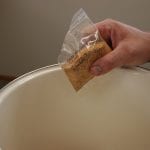 Next, add one packet of seasoning per 5lbs of meat. If you want to add anything to the recipe, now is the time to do it. For example, if you’re cooking the jerky in a conventional oven, you might want to add a few drops of liquid smoke. Or if you want the jerky to be a little more spicy, you can add some cayenne pepper, etc, etc 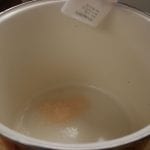 Add 1 cure packet for every 5lbs of meat 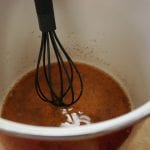 Mix the seasoning into the water/cure mixture until well dissolved 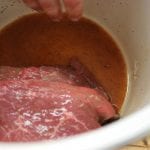 “dredge” the slices through the cure seasoning mixture so that all sides of the meat are contacted by the cure/seasoning marinade. This is important because it will expose all surfaces of the meat to the sodium nitrate cure, which will prevent food borne illnesses like botulism. No one wants botulism 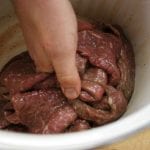 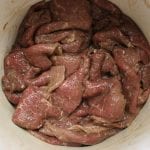 Once mixed, allow the meat to sit for 24 – 36 hours before cooking. This allows the sodium nitrate to fully penetrate the meat, it also gives the seasoning time to “bloom” and deliver the best flavor possible. 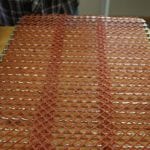 After the jerky has marinaded for a couple days, it’s time to lay it out and cook it. We’ll be cooking this batch in our smoker. It’s also easy to cook jerky in a conventional oven. — at Nebraska Star Beef. 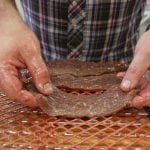 When laying out the jerky, allow a little space between each of the slices and make sure that none of the pieces are folded or covering other pieces of meat. This will allow for the most consistent cooking possible. Consistent cooking makes the best jerky. 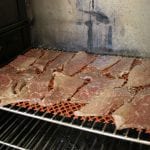 Set the oven to it’s lowest temp, or the smoker to 170F and cook the jerky until then internal temperature of the jerky reaches 165F 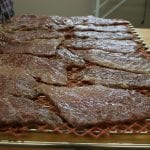 When the jerky is all laid out, it’s time to get it into the smoker or oven for cooking. Lots of folks believe there is some magic formulae for cooking jerky… there isn’t. It’s the simplest thing in the world. 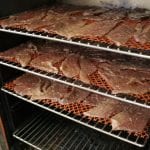 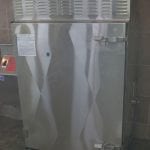 This is our jerky cooking oven. We do a lot of R&D at the office so we have a more commercial type unit. That said, we’ve made awesome jerky in our conventional ovens for decades. Conventional ovens make great jerky; you don’t need a smoker unless you want one 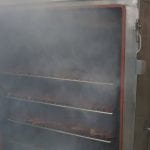 This is one of our favorite sights around the office… the smoker door is opening up and fresh jerky coming out. 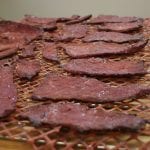 Fresh jerky right out of the smoker…this is better than fresh chocolate chip cookies…except mom’s cookies, we can’t top them with jerky… (we want to get fed today, can’t make mom mad) 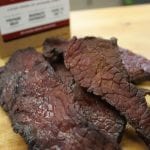 Close up of the last shot. 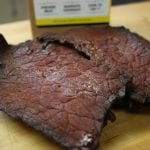