Flavor in a Flash! – Fresh Frozen vs. Frozen Foods 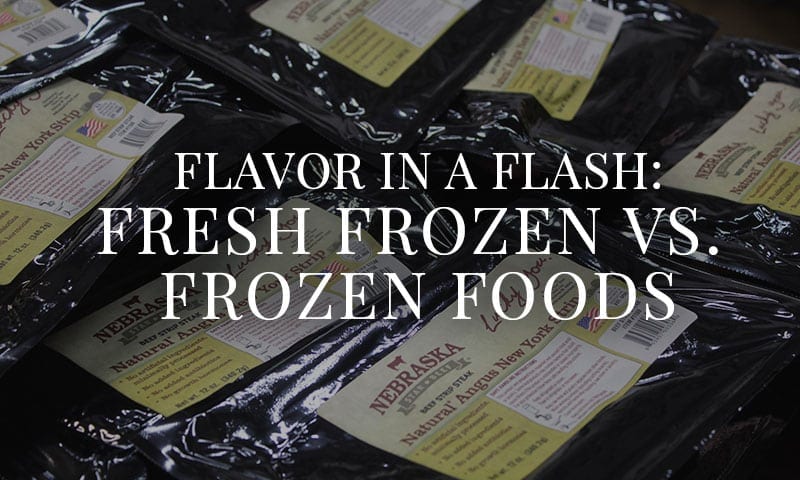 Like many conveniences that we have today, frozen food is something that we largely take for granted. During the mid-late 1800’s through the early-mid 1900’s there was a tremendous amount of revolutionary development on the refrigerated and frozen food fronts, that had a major way on how, and where, beef was consumed.

During that time period, it was common to “drive” cattle to satellite cow towns like; Ogallala, NE, Dodge City, KS, and Abilene, TX where cattle were loaded on trains bound for Omaha, NE, St. Louis, MO or Chicago, Il stock yards and packing houses. While today a good deal of live cattle rail transportation has turned into semi-trailers on the interstate and highway systems to minimize animal stress and length of trip, rail is still a big part of the system. Railroad had the first big development for transporting beef in 1878 when Swift and Company hired an engineer named Andrew Chase to fix problems that existed with current refrigerated rail cars. Chase used thermal dynamics as the core of his design – warm air rises, and cool air sinks. Chase located the ice compartments in the top of the refrigerated rail cars – or reefers – and the carcasses lower, with vents in the top of the cars to let the warmer air out. This also kept the center of gravity of the cars lower, which eliminated the major problems that earlier reefers had which was derailment. 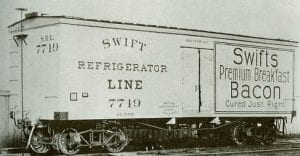 put in place by the major railroads of the time who had major resources in cars for hauling live cattle as well as feed yards along the tracks. Swift worked with a Canadian railroad company to accomplish this and set in motion one of the most profound changes to the way beef was transported and consumed. This development meant that fresh beef could be efficiently processed in the large Chicago Stock Yards, then shipped, fresh, by rail, to both coasts to feed the growing demand and cement beef as America’s protein.

While all of this was going on in and around the heartland of America, another very – arguably the most – prominent figure in frozen foods was born in Brooklyn NY in 1878. Clarence Birdseye 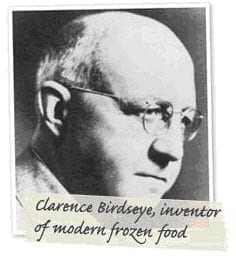 went on to drop out of Amherst College due to financial difficulty in 1908 and got a job with the USDA. Among his travels for the USDA was a trip to Labrador, Newfoundland from 1912-1915. During this time is when the frozen food epiphany that defined him, and the future of frozen foods occurred. Birdseye had been exposed to the freezing of food to preserve it while living in New York City, however, the food did not taste as fresh as the the fish that the Inuit caught, and froze, while ice fishing. Birdseye studied the phenomenon and came to understand that the fish that were caught in the -40F temperatures froze almost instantly when they were removed from the water.

At that time, commercial freezing happened much, much more slowly. Birdseye discovered that “flash freezing” significantly improved the quality of the frozen food. The reason is physics. When ice forms rapidly, the crystalline structure is very small, this small ice crystal structure does not damage the cell membrane of the food that is being frozen. Birdseye patented numerous methods of freezing food rapidly 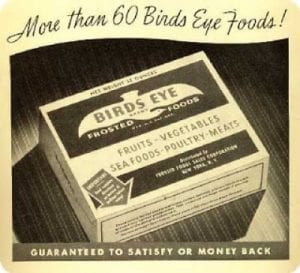 through the 1920’s and created Bird’s Eye Foods, which is a leading frozen food brand to this day. Beef is one of the foods that was profoundly affected by Birdseye’s development. Today, the fresh beef that is able to be transported via refrigerated transportation – electronic refrigeration and trucks in addition to rail cars today – which allows beef to be transported to high tech cold storage facilities for aging and flash freezing. Beef has never had it better in the history of the world.

How does all this fit with Nebraska Star® Beef’s business model? It is absolutely integral to our success. Nebraska Star® Beef hangs our hats on “consistent quality”  We have a very specific process that ALL of our beef goes through to create what we believe is the best beef in the world. We studied the the history of frozen foods and understand that there is one whole heck of a lot more to freezing a product than simply putting it in the freezer – even if it’s in a vacuum sealed package.

Our cattle have a short ride to the processing facility – minutes not hours. This minimizes stress  on the animal and has a positive effect on the end product. We truly want our cattle to only have one bad day. Once the cattle are harvested, the carcasses spend at least 21 days in the locker. This is the first part of the aging process. Once the carcasses are ready, we break them down into what is called “primals”. Primals are the major muscle groups from which different, more commonly known cuts originate. Rib Rolls, Strip Loins, Top Butts, Rounds, Chuck, and PSMO, Shoulder Clod, knuckles and lean trim are the main groups from which we build our steaks.  The steak cuts are wet aged – a process of bagging and aging – for another 40 days which creates the most tender, flavorful and juicy steak possible. Some folks prefer dry aging, and that’s a fine process as well, we simply prefer wet aged steaks. The other cuts are frozen immediately. The reason is that the majority of them are used in our beef snack sticks which require very in-tact protein for proper meat binding.

Once the wet aged steak primals are finished aging and cut, they are individually packaged in heavy, high barrier plastic cryo-vac packaging. This packaging is different than the preformed bags that are available to consumers. The industrial version of the cryo-vac plastic that we use is custom formed to the shape of the steak, then under very high vacuum all of the oxygen is removed from the area around the steak and all 4 sides of the package are sealed at once. When the packaged steaks exit the machine they are laid out on special racking that keeps all sides of the steak exposed to the blast freezer. Once in the blast freezer, the steaks are exposed to -45F temperatures with high humidity numerous fans which continuously circulate the thick air rapidly. The steaks freeze momentarily. The extreme cold forms the small ice crystal structure that Birdseye is famous for discovering, and locks in the moment of perfection that our steaks our cut. Once blast frozen and packaged, our steaks are moved to a state of the art cold storage facility which maintains the extreme sub-zero temperature and humidity. We have tested steaks that have been in the freezer for 4 years and there is no discernible difference in quality from a freshly frozen steak as long as the integrity of the package is not compromised. Normally our entire steak inventory turns every couple weeks so the steaks that ship are very fresh. However, they will keep very well in a regular deep freeze for up to a year.

When it comes to preparation, you want to thaw them exactly the opposite of how we froze them … s-l-o-w-l-y … thawing slowly helps to protect the cell membranes that the rapid freezing helped to keep in tact. Bringing the meat back from it’s cryogenically stabilized state as slowly as possible is critical in delivering the best steak experience.